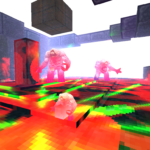 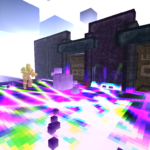 [For 64 bit modern versions of Windows]

The last 6 months I’ve had my head down working to bring the engine’s systems to a professional level of quality. In the years spent pottering part time on the engine I found it sufficient just to get a system working then move on. Who wants to spend days on end pouring over minutiae when there’s animation and particle effects to work on? There was no compulsion to put in that final 10% to ensure the system was rock solid. As a result the engine’s functionality has been almost there, but not quite. The collision scheme is a good case in point, it worked most of the time but there would be those moments when the player pressed against a wall at a certain speed and angle and fell straight through the floor. This is acceptable in a home brew project, but not in an aspiring commercial product. There’s a saying along the lines of the last 10% is as hard as the preceding 90% and I found that to be true. After some effort the engine is well on it’s way to being a simple yet robust product. Here’s a brief synopsis of changes:

There are still a host of minor things to do, but the engine has taken a big step forward. The game systems are pretty much where I want them to be, save a few tweaks. Next I move onto a small game project, details to follow!